You are using an out of date browser. It may not display this or other websites correctly.
You should upgrade or use an alternative browser.
C

Silverman was pretty meh imo, it's too slow, tho the first person perspective, where she tells it as a part of her growing up, is original.

The following is an actual question given on a University of Liverpool chemistry final exam.

The answer by one student was so “profound” that the professor shared it with colleagues via the Internet, which is why we now have the pleasure of enjoying it as well.

Most of the students wrote proofs of their beliefs using Boyle’s Law
that gas cools when it expands and heats when it is compressed or some variant.

One student, however, wrote the following:

First, we need to know how the mass of Hell is changing in time. So we need to know the rate at which souls are moving into Hell and the rate at which they are leaving. I think that we can safely assume that once a soul gets to Hell, it will not leave. Therefore, no souls are leaving. As for how many souls are entering Hell, let’s look at the different religions that exist in the world today. Most of these
religions state that, if you are not a member of their religion, you
will go to Hell.

Since there is more than one of these religions and since people do
not belong to more than one religion, we can project that all souls go
to Hell. With birth and death rates as they are, we can expect the
number of souls in Hell to increase exponentially. Now, we look at the
rate of change of the volume in Hell. Because Boyle’s Law states that
in order for the temperature and pressure in Hell to stay constant,
the volume of Hell must expand proportionately as souls are added.

1. If Hell is expanding at
a slower rate than the rate at which souls
enter Hell, then the temperature and pressure in Hell will increase
until all Hell breaks loose.

2. If Hell is expanding at a rate faster than the increase of souls in
Hell, then the temperature and pressure will drop until Hell freezes
over.

So which is it?

If we accept the postulate given to me by Sandra during my freshman
year, that “it will be a cold day in Hell before I sleep with you,”
and take into account the fact that I slept with her last night, then
number 2 must be true, and thus I am sure that Hell is endothermic and
has already frozen over.

The corollary of this theory is that since Hell has frozen over, it
follows that it is not accepting any more souls and is
extinct…leaving only Heaven, thereby proving the existence of a
divine being - which explains why, last night, Sandra kept shouting
“Oh my God.”

THIS STUDENT RECEIVED THE ONLY
“A”.
Click to expand...

This joke is older than me.

Reminded me of this story (also fake btw

The following concerns a question in a physics degree exam at the University of Copenhagen:

"Describe how to determine the height of a skyscraper with a barometer."

This highly original answer so incensed the examiner that the student was failed immediately. The student appealed on the grounds that his answer was indisputably correct, and the university appointed an independent arbiter to decide the case.

The arbiter judged that the answer was indeed correct, but did not display any noticeable knowledge of physics. To resolve the problem it was decided to call the student in and allow him six minutes in which to provide a verbal answer that showed at least a minimal familiarity with the basic principles of physics.

For five minutes the student sat in silence, forehead creased in thought. The arbiter reminded him that time was running out, to which the student replied that he had several extremely relevant answers, but couldn't make up his mind which to use. On being advised to hurry up the student replied as follows:

"Firstly, you could take the barometer up to the roof of the skyscraper, drop it over the edge, and measure the time it takes to reach the ground. The height of the building can then be worked out from the formula H = 0.5g x t squared. But bad luck on the barometer."

"But if you wanted to be highly scientific about it, you could tie a short piece of string to the barometer and swing it like a pendulum, first at ground level and then on the roof of the skyscraper. The height is worked out by the difference in the gravitational restoring force T =2 pi sqr root (l /g)."

"Or if the skyscraper has an outside emergency staircase, it would be easier to walk up it and mark off the height of the skyscraper in barometer lengths, then add them up."

"If you merely wanted to be boring and orthodox about it, of course, you could use the barometer to measure the air pressure on the roof of the skyscraper and on the ground, and convert the difference in millibars into feet to give the height of the building."

"But since we are constantly being exhorted to exercise independence of mind and apply scientific methods, undoubtedly the best way would be to knock on the janitor's door and say to him 'If you would like a nice new barometer, I will give you this one if you tell me the height of this skyscraper'."

The student was Niels Bohr, the only Dane to win the Nobel Prize for physics.
Click to expand...

What did the leper say to the prostitute?

A man comes home and shouts "Honey! Pack your bags! I just hit the lottery!"
She screams "OMG! What should I pack?"
He says, "Everything! Get the f*** out!"
C

Pretty nasty one for the people who keep up to date on football....

'Do you think Adebayor ran the length of the bus to celebrate infront of the gunners?'

Careface said:
Pretty nasty one for the people who keep up to date on football....

'Do you think Adebayor ran the length of the bus to celebrate infront of the gunners?'
Click to expand...

Careface said:
Pretty nasty one for the people who keep up to date on football....

'Do you think Adebayor ran the length of the bus to celebrate infront of the gunners?'
Click to expand...

I thought it was funneh

Whos the coolest guy in a hospital?

Who covers when the ultra-sound guy isn't? there?

The hip-replacement dude
A

A man was rushed to hospital when a bizarre sex game went wrong leaving him with six toy horses stuck up his arse.

Doctors described his condition as stable. 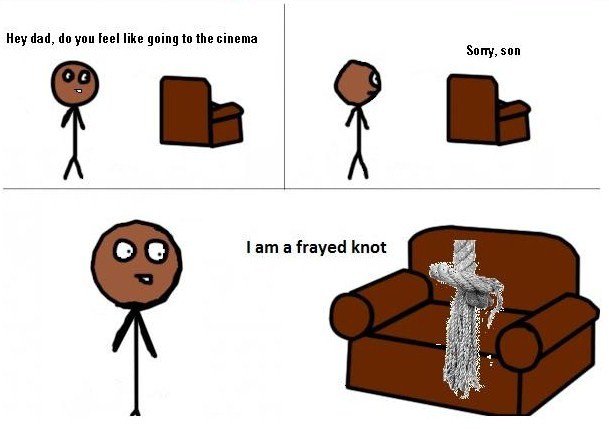 I heard some jokes about that bloke who went on the run with a shotgun in Rothbury, England, but none of them were Raoul-Moat-ley funny.

haha was worth a chuckle

How many surrealists does it take to screw in a light bulb?